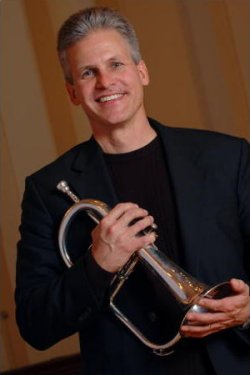 
Bob Lark is recognized regionally, nationally and internationally as a contemporary jazz educator and performer of integrity. His approach to pedagogy and rehearsal techniques has been noted by participation in professional conferences; publication of articles; compact disc recordings as both a performer and ensemble director; and the direction of numerous student honors ensembles. Down Beat magazine recognized Bob’s work in 2010 with their Jazz Education Achievement Award.

In 2013, DePaul University honored Bob Lark as an ambassador for the DePaul Distinctions campaign. He serves as a Professor of Jazz Studies at DePaul University. Under his direction The DePaul University Jazz Ensemble has produced several Outstanding Performance Awards from the Jazz Educators Journal, Down Beat and Jazz Times magazines, and has recorded albums with several legendary jazz artists, including Phil Woods, Clark Terry, Bob Brookmeyer, and Randy Brecker,

In speaking of Lark, jazz icon Clark Terry stated, "He's a very good trumpet player, a very good musician. He’s paid his dues." Recordings on the Jazzed Media label include those by The Bob Lark/Phil Woods Quintet,Bob Lark and his Alumni Big Band, and Bob Lark and Friends, with Phil Woods, Rufus Reid, and Jim McNeely. He is an exclusive Yamaha Performing Artist.

Bob is an active clinician, soloist and guest conductor. He has served as host for the Carmine Caruso International Jazz Trumpet Solo Competition, is the past-president of the Illinois Unit of the International Association for Jazz Education, and has chaired the International Trumpet Guild jazz improvisation competition. Throughout the 1990’s, Bob directed the Midwest GRAMMY High School Jazz Band. He holds a Doctor of Musical Arts degree in performance from the University of North Texas, having earlier earned a Master’s degree from that school, and a Bachelor of Music Education degree from The Ohio State University.